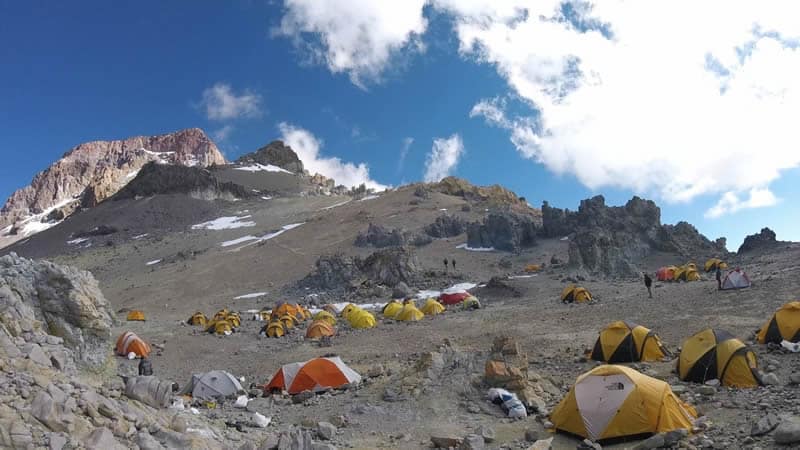 After the Air Canada fiasco, and those of you that follow me on Instagram know about the ordeal and the inconvenience caused by Air Canada when they only decided to turn around a flight after 3 and a half hours into the flight, all the way back to Toronto – when we were already over the Bahamas. REALLY?!? Getting myself to Penitentes , Argentina, after more than 24 hours delay was not easy, especially when you have a 10 hour flight and then a connecting flight which I had missed. The next connecting flight would have delayed me yet another day. Such a frustrating start. On February 5th I was finally able to get to Argentina, after driving from Santiago, Chile and crossing the border by car. I felt somewhat flustered, as I had missed gear check scheduled the day before in Mendonza, and of course, I had missed valuable information on the expected climb, schedules, etc.

The Alyen hotel in Penitentes, had a room which was pretty dismal, but maybe it was intentional to get us used to the tent and dirt in Aconcagua. It worked! The green carpet in the room was worn and underneath the radiator, it was down to its last

fibres. The bed was only a mattress against the wall on a cheap metal frame. Thin sheets.  In short, it was one of the worst hotels I have ever stayed in.

Penitentes is an old ski resort town, that now is only open for the short season that the Aconcagua National Park is open, and welcomes climbers, or the occasional person that is passing through and needs a room. It doesn’t even have WIFI and from the reviews on Expedia, it has not had WIFI for a long time – even though every guest is simply told that the antenna is broken, as if it just happened.

But the next day, thankfully, on Wednesday, Feb 6th, we make our way to the entrance of the Aconcagua National Park, to climb the normal route of the mountain. We stop at the park ranger’s office and our guides pick up our park permits that cost each of us $610.00US. Was that $61.00US? No, it was $610.00US. Whoa! Then we are required to show our passports as ID, before gaining entrance.

The trek from the beginning of the trail to the Confluência Camp was about 3 hours. Our group gear was being carried by mules, who on this particular day were very slow. I know. I know. Mules are supposed to be slow. But these ones were sedated s

low. We only got our duffle bags around 9 pm!

While we waited, we had dinner. Some of us went for a short walk to the top of the hill to see the whole camp, from “above”, and Vern and Carole our guides, taught us how to build a tent “Aconcagua” style. So that our tents would have the best chance to resist the high winds and not blow away. This training would come in very handy!

The camp has a medical office, staffed with a doctor employed by the park and whom we all have to go see the following day on Thursday, Feb 7th, to get the ‘green light’ to move up the mountain to basecamp the following day, Friday, February 8th. This would be one of two visits with the park’s doctor. The park authorities want to ensure climbers are not experiencing altitude related illness, which cuts down on emergency rescues.

Our tents for this expedition are a 3 person tent, but really only 2 people fit, and in very close quarters. My tent mate is Jenny, a young lady from Chicago in her mid 20’s.

There are only 3 women on the team, and I had been asked the previous day before we left for the trail, whom I preferred to share a tent with. Two male teammates were given to me as my choices; I said no to both. I was utterly surprised this was an option – pair teammates with teammates of the opposite sex!? When I expressed my displeasure, I was assured they would find a solution. They did. Yesterday during our tent building lesson, the guides asked one of the other females if she would mind sharing a tent with one of the other males. She said no. And so the situation was resolved. I still find this presumption uncomfortable and somewhat surprising.

Thursday the 7th, we went for a 7 hour acclimatization hike towards Camp Francia, for a view of the south face of the mountain. The colours of all the rock faces on our way there were spectacular!

Friday, Feb 8th, we made our way to Plaza de Las Mulas, Basecamp for the Normal Route. It took us “8 hours plus 1”, as Vern said. For a long period of time we hiked on flat terrain and then slowly we gained

What can I say about Plaza de Las Mulas? It’s a tent city on a plateau of the mountains. We had to select our campsite and build our tent and that’s ALL that was interesting.

Alpine Ascents local contractors are Aconcagua Mountain Guides, which is actually a subsidiary of Alpine Ascents. Inca, another outfitter at the camp, is clearly the prominent provider here. Their tents and facilities are at the entrance of the camp. I couldn’t help but notice they are shinier and seem new.

It was a long day.  I don’t get cell service even though many people seem to – but I was able to buy WIFI for the days we are here, so I can talk to my husband Steve, my daughters Nicole and Patricia and of course, my grandchildren Ethan and Julia. My family. My lifeline.

Feb 9th, we tried our crampons on, and went for a short exercise wearing them on some dirty snow. Afterwards, we went for a short 90 minute hike, over lots of rock, to ice sticking out of the mountain like icicles, which are called penitents.  It was pretty cool.  But also, I never realized that so much dirt can be on top of an actual glacier – the primary reason why it’s so dusty and a little disgusting here.

This outing was followed by a group meeting, to discuss the game plan for the next few days.  Acclimatization is an important part of climbing, especially at this height, to have the best chance of success. The following day it was decided we would do a carry up to Camp Canada, and the next day it  would be the repeat of the same.

A ‘carry’ is done to carry a small amount of supplies to a higher camp, and leave them there to be used once we move up to that camp. This exercise serves to acclimatize and also to lessen the weight of carrying the supplies we need, in our backpacks.

Porters are now available on the mountain and I have taken advantage of them. So I will not do a ‘carry’ of group gear or supplies, but only take my daypack and simply enjoy the acclimatization climb. The porters will carry my portion of the group gear and my own personal supplies, on ‘move’ day. The plan is to do the same the next day and then move up the following day. The theory is to climb high, sleep low.

the second carry day the winds are extremely high and we get hit with a snowstorm.  The snow is small round ice pellets, not beautiful snowflakes. This is jarring and difficult.

We were offered a free shower because the mules had been late when we came into Confluencia, the previous camp and we all take advantage of it here at basecamp. But the word ‘shower’ is used loosely. The water only served to rinse the dust off and it was cold! Unfortunately no one shared a vital piece of information – I only had to move the lever a very short space to get warm water!

Camp Canada is at 4947 metres but surprisingly, my Sunto watch showed 5001 metres as a measurement. Feb 12th was a rest day. We did nothing, just ate and stayed in our tents actually. Pretty boring. One of the other female teammates went for a swim in one of the lakes nearby, apparently skinny dipping. I passed.

Feb 13th, we moved up to Camp Canada. The camp sits on a hill, and if you take a wrong step, you might just fall off, but the view is amazing. “Ahhhhhh” had two meanings!

The porter assigned to me moved everything, I just kept my emergency gear in my back pack and also a bottle of water and my personal documents like passport, insurance and money. That was very nice.

At camp Canada the group had all opted to use the services of the porters to set-up our tents. It was so much easier to reach camp and have a place to get comfortable in, sheltered from the cold and wind.

Once again, my tent mate and I, have a tent that has something wrong with it. Ugh.

The tents are NorthFace and spacious, but they are beaten up or they just don’t hold up. This time we are stuck with a vestibule zipper that is broken, so we literally crawl in and out of our tent.

Feb 14th, we do a carry to what will be our second camp, Nido de Condores. It was a 3 hour hike up and then we left some personal gear there.  It is a huge camp and the 360 degree views are just amazing! Mountainous peaks and vast sky as far as the eye can see. Spectacular. There is also a rangers’ station here and a helipad.

Coming down it took us only an hour.

One of our teammates, Sequoia reported a headache and Diego, one of the guides raced down the mountain with her. The rest of us followed.  My feet were sweating with the socks I had chosen and I got two blisters. Not much to complain about in the grand scheme.

When we got back to camp Canada, there was hardly walking space between tents. There are tents everywhere around us. Seems everyone at basecamp is moving up. There are climbers galore.

Sequoia is not feeling well. She is the 3rd female of our team. She is still reporting headaches and Carole accompanies her down to Basecamp to see the doctor.

Tomorrow we move up.

We are a volunteer organization of individuals who want to have an impact on mental health by providing funds to specialized organizations with expertise in the mental health area, with an aim for permanent change.

Your ticket for the: Climbing Aconcagua in Argentina